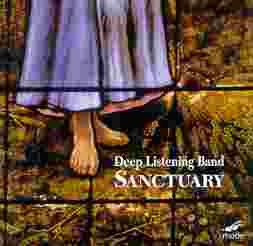 "Deep listening" has been the constant description Pauline Oliveros applies to her music. As applied here, it doesn't mean what some musicians might think: multi layered intricate music that takes concentrated attention in order to glean its rewards. Instead, Oliveros seems to be referring to the overt spiritual nature of her efforts. She wants her listeners to enter an attentive trance. The improvised structure of the music appears less important than its emotional effect. Her approach to the spiritual is fairly predictable: generally consonant improvisations over sustained bass drones, echoing interiors. The effect is more elaborate but not substantially different from the Paul Horn albums of the seventies set inside the Taj Mahal and the Great Pyramid.

There is something humorous about the term "band" when applied to this music. There are no dance beats here. But due to the number and variety of performers and instruments, there is a more immediate attractiveness to this recording than to others of hers I've heard. There are didjeridus, clarinets, organ, flutes, electronics, latin drums, bells, you name it. There is even something called the expanded instrument system (EIS) which transforms the acoustic sound through computer processing. The result however is not overcrowded but a gentle ever-changing sustained ambiance. Unfortunately, at times it does not stand out all that much from many other "new age" recordings and some touches such as wordless chanting and didjeridu playing have been overused in that genre. It seems that Oliveros may have been trying to connect with a crossover audience with this recording.

Invocation has sweeping tones of unknown origin introducing a distant trombone which plays a noble duet with the voice of Julie Lyon Balliet over an accordion drone.

The accordion has more of a lead roll, along with flutes, chanting and didjeridu in the richly resonant Hi Bali, Hi. Short pitch bends are played on accordion and horn through the EIS sound processing system. Eventually all sounds glide downward softly to a conclusion.

Bells add a brightness to the optimistic Processional which again features the voice of Julie Lyon Balliet trilling throughout. A pure organ tone joins in as well as surprise bursts from the didjeridu. A constant undulating phase sweep dominates the bass.

The title track Sanctuary stands out the most from the others with its darker texture and nervous erratic portamentos. It is in 3 sections all of which make use of pitch bending. Finally a trombone calms the proceedings with echoing repeated phrases and fanfare-like trumpet figures.

Non-stop Flight is a 21 minute excerpt from a 2 hour live performance. 10 other performers are added to the regular "band" of Stuart Dempster, Pauline Oliveros and David Gamper. Though the forces are larger they are used sparingly and the sound texture is similar to the other pieces with echoing horns, sudden pitch bends, and chanting wordless voices. One big change through is the addition of Brazilian drums halfway through giving a newfound propulsion to the improv.

Since Oliveros' work is improvisational, the performers either make or break it. Here they do not disappoint and the pieces convey the generalized spiritual charge Oliveros intended. The CD is very well recorded and another headphone adventure. I'm still waiting for Oliveros to map out a new spiritual dimension, perhaps one less lulling and secure but there is room in eternity for everyone.