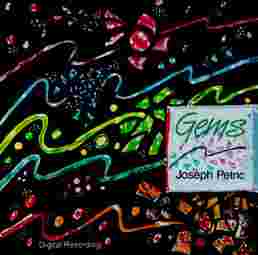 Allow me to be completely honest with the readers of this review from the onset. You should know from the start that Joseph Petric (the CD's accordion artist), as well as Richard Romiti and Daniel Foley (two composers from the CD) were at one time all very good friends of mine. I was the first accordion major at the University of Toronto in 1973, and was followed there the next year by Messieurs Petric and Romiti, and the following year by Daniel Foley (the only non-accordionist of our group). The University of Toronto was and still is a haven for serious accordionists and composers, especially under the watchful eye of our outstanding teacher and concert accordionist, Joseph Macerollo. Joseph Petric and I played in the same University of Toronto Accordion Quartet/Quintet. Romiti, Foley, and I all had composition classes together in our graduate studies at the University. Obviously there were great friendships formed during this period of growth and we all had our dreams of becoming professional performers and composers. But please be aware that I have unfortunately had almost zero contact with these great musicians in the last 22 years. Life went on and we all went our separate ways. Why do I go to the trouble of drawing attention to all of this? Because if any reader of this review were to later realize that these friendships existed, they might immediately be tempted to dismiss this review as biased drivel. However, although there are fond memories of these gentleman, my objectivity would not and could not be affected in reviewing this or any CD. In fact, if nothing else, the 22-year absence would enable that objectivity to increase, for a fair and impartial assessment.

With that area covered, let it suffice to say that this is one of the most intriguing and interesting contemporary music CDs (with or without accordion) that I have had the pleasure of auditioning. Gems is appropriately named because the performances as well as the compositions are all of the highest quality, and they each maintain their own indigenous points of light, interest, and rarity.

My immediate disclaimer for conservative and non-adventurous listeners out there is that they may find the content of this CD to be difficult listening. But I will reiterate the point from my other reviews that nothing worthwhile is ever easy. If your ears are not especially acquainted with contemporary musical literature, then maybe this CD is a good vehicle with which to drive down that road. For those of you who are already steeped in the world of experimental sounds and intense creativity, this CD will be "ear candy". Each piece is unique and interesting in its own way and presents new aural challenges. Of course, from a compositional perspective, I have my favorites and also have opinions about those pieces that are less successful. But the CD as a whole is a tour de force of contemporary accordion literature and performance.

Pneuma is absolutely striking from all possible perspectives. Joseph Petric's performance is sensitive, meticulous and world class. The compositional process used in this piece is ingenious, and the technology (i.e. computer sound events triggered by foot pedals) was leading edge at the time this work was written. As someone who composes with sequenced computer passages, I can assure you that synchronizing live acoustic events with computerized events is rather difficult. However, giving the performer control of this situation in 1987 was quite a creative idea. Simply a beautiful accordion and electronic music amalgam.

Equivoque, the second cut on the CD is yet another unexpected surprise and delight. It is essentially a study on Baroque-like music written in two different keys (a tritone apart), again with the accordion part playing in a duet relationship with sequenced computer passages. The affect is quite surreal as the two keys approach each other, collide, and move away from each other in a cyclical pattern. Each time the "collision" occurs, it's like two different tonal colors splashing together to form a third atonal color, each time pushing any kind of tonal focus just beyond the listener's grasp. Quite an innovative concept that literally snapped me to attention as soon as I heard it. I only wish I had thought of this idea first. The accordion part is quite intense and involved in spite of the relatively short length of the piece and once again, Petric's performance is flawless, sensitive, and in a word, beautiful.

Sonic Eclipse written by Richard Romiti is a mature, well-conceived, and well-constructed blend of the best that the accordion and the cello have to offer. The structure of the work is lucid and the coloristic interplay of the two instruments is exciting and innovative. I first heard two performances of this work around 1990, both vinyl editions, one being an earlier recording from Joseph Petric. The other recording was from the great European accordion artist, Hugo Noth. Many people have heard and read my opinions about Hugo Noth. I have profound respect for his abilities and he is one of the few accordionists I would equate with the talents of Horowitz or other great pianists. In fact, Mr. Petric studied with Hugo Noth at one point in his career. In spite of my opinions and respect for Hugo Noth, Joseph Petric's understanding and performance of this particular piece is much more sensitive and calculated. Although this work is not focused on highly virtuostic passages, it has all types of technical challenges (i.e. rhythmic, dynamic, and ensemble interplay) which Joseph Petric executes with ease. Cellist, David Hetherington also contributes remarkably to the success of this recording. Sonic Eclipse is truly a gem and is one of the finest works on this CD.

St George Blues was a refreshing surprise and has the same dry wit as its creator, Daniel Foley. Mr. Foley's output has been quite prolific, even as a student, and this piece shows his early abilities to adapt to any instrumental combination. Although accordion and viola is a less satisfying instrumental combination for me (compared to cello, string quartet, or string orchestra), I didn't mind the duet in this context, as the intent of the piece was achieved quite successfully. The CD liner notes indicate that "The work ends with an evocative duet exploring the intimate and poetic side of both instruments." This is probably the most accurate description of what one can expect to find in St George Blues. Aside from the poetic nature of this work, I would add that there is a drop of humor that makes it an evocative and joyful listening experience.

Melodia is quite an engaging piece that is very focused on exploring the densities of various harmonic and cluster combinations, as well as the overtones and subtones that can result. This is a work that asks of its listener to develop "depth perception" and to be patient in uncovering all of the beautiful pitch and dynamic ranges, color ranges, extreme range combinations, and sustaining qualities that the accordion has to offer. Take your time listening to this piece. The composer is not going anywhere fast with Melodia and neither should the listener.

Trio Sonata was the only dissatisfying piece on this entire CD. Having rented the score from the Canadian Music Centre, the music tended to be just as rambling, disorganized, and unfocused as is the appearance of the score. I certainly did not sense the "tight structure" that the liner notes claim the work possesses. If the alleged structure was present, it was overshadowed by a lack of sensitivity to the potentials of this ensemble. Composer, Bengt Hambreaus, has fallen prey to what many inexperienced non-accordionist composers do when they first write for the instrument - that is, concentrating on extremely high registers continually, or the use of the full stop Master or Organ registers almost exclusively. However, this lack of imagination doesn't exist totally with the accordion. Mr. Hambreaus also seems to concentrate on the least colorful sounds he can evoke from either the piano or the trombone. In fact, aside from brass ensemble or tuba, trombone combined with accordion is possibly one of the least flattering instrumental combinations for which one can choose to compose. Neither instrument has anything to offer the other and rather than trying to hide that fact, Mr. Hambreaus seems to be determined to emphasize it with this work. One section that is especially irritating revolves around the trombone muted sounds that keep entering the rather nice mosaic being created by the piano and accordion. The muted trombone intrusions are like a troublesome mime in the park trying to interrupt a meaningful and important conversation between two people. Trombone is a beautiful instrument in many other combinations, but not in this one. Additionally, the recording engineering on all the other tracks of this CD are excellent, but unfortunately, adding to the demise of Trio Sonata is a total lack of presence for the accordion, which finds itself frequently overpowered by the other two instruments. The instrumentalists themselves did a wonderful job however, like academy award winning actors in a B-grade movie. Pianist, Christina Petrowska's performance is stunning, and the trombonist, Marc Donatelle, did a great job with the inferior material he was given to play. Joe Petric's performance again was outstanding, and was only tainted by music that failed to showcase his wonderful talents.

Aside from the last piece on the CD, the rest of the recording is a great achievement and Mr. Petric is to be congratulated. I highly recommend it especially for those who have a love for contemporary music. And for those who are more conservative listeners, you are still certain to enjoy the more accessible works on the CD, namely Equivoque and St George Blues, and may find yourself drawn to the other offerings on the recording as well. I have four more CDs to review by Joseph Petric, and I am itching to get to them all, based on the outstanding quality of Gems. Enjoy!