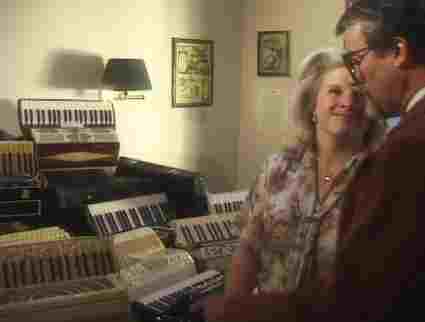 The plot: at times melodramatic and corny. Most of the actors: obviously not seasoned professionals, merely amateurs. The lead character: the eccentric and artless Emery Ried (portrayed by Richard Rouse), an outdated relic from a bygone era, one of the last survivors from the golden age of the accordion (ca. 1920-1955). His wife, Rose (portrayed by Mary Kate Sawert): a jealous woman on the verge of filing for divorce because of her husband's all-consuming love affair with his mistress: an accordion which he affectionately calls Princess Isabelle.

I loved it! And I think so will you.

Morgan W. Boatman, the writer, director, producer and editor, is a surprisingly talented man (and accordion aficionado) who put together this incredible 95 minute movie (shooting began in May 1998 and editing was finished in June 1999), just in time to have his opus 1 premiered at the prestigious WorldFest Flagstaff International Film Festival in November of that year.

I was amazed what Boatman was able to accomplish with a modest budget: recruiting twenty-five actors, eight dancers, more than fifteen musicians, as well as seventy extras to donate their time and talent (all were unpaid) to create a cinematographic work of art (slapstick at times) with a twist.

Rose really hates her husband's accordion, an antique 1920's model, and I can understand why: she feels like a second fiddle in comparison. I know from experience what this can do to a marriage. When I picked up my accordion after a 20 year hiatus and began practicing for my Classical Christmas compact disc recording sessions, my wife (I should say my former wife) frequently referred to herself as a frustrated "co-wife," (she hails from India where such things as polygamy still go on) because I spent more time embracing my musical instrument than her.

But enough transgression, back to the story: Emery leaves town for a business trip and Rose, while vacuuming the upstairs carpet, unintentionally destroys her husband's beloved instrument. This scene is absolutely hilarious -- the accordion (1) is accidentally jostled by an extension cord, (2) falls off the closet shelf, (3) rolls down the stairs, (4) flies through the wide-open front door, (5) bounces across the driveway smack into (6) the bumper of a speeding semi-truck which (7) smashes it into hundreds of tiny pieces!

Although Rose is visibly pleased because of the demise of her rival, she soon becomes fearful of the disappointment and wrath of her husband, and decides to find a replacement before he returns. Most of the movie is about her never-ending adventures at dozens of music stores, thrift shops, antique stores and flea markets across the state.

I recommend this movie for all lovers of the accordion. Granted, some of the acting might seem to be a bit contrived, but it doesn't matter; the movie has a small-town flavor to it. The characters are not slick or Herculean or bigger-than-life, they are only ordinary people (perhaps like you and me).

Oh, I should mention the soundtrack: some of the music is novel -- such as the blues singer with the gravely voice accompanied by the squeezebox -- but most of it is quite innocuous, and unpolished as well. But it doesn't matter; the music succeeds in providing atmosphere for the film, as it reflects the simplicity of the main character, who, despite his infatuation with his beloved Princess Isabelle, still could not play more than the simplest tunes.

The Screenplay: 55 pages. About one year to write in spare time.

The Edit: Edited on the Fast DV Master Non-Linear Editing System. From June 1999 to September 1999 mostly after midnight.

The Budget: About $10,000 including lots of equipment, props and a VW Bug.

The Actors: About twenty speaking roles. All principals are Flagstaff locals. Some are experienced actors, some are not.

The Music: All music is traditional or original; performed specifically for the film.

About the Director/Producer: For ten years Morgan W. Boatman has worked in the film and video field. Learning his trade through experience on hundreds of projects ranging from commercials and cable shows to low-budget features, he quickly ascended the ranks from PA to DP. Now, taking the director's reins of his own feature for the first time, he has brought to the screen a unique perspective on a much-maligned musical instrument. "The accordion," Morgan says, "is the perfect symbol for underdogs everywhere. And everyone's been an underdog at some time." Morgan's bread and butter is three-dimensional computer animation and video production. Winter Communication is the digital project studio he runs in Flagstaff, Arizona. Morgan plans to continue writing and making films.