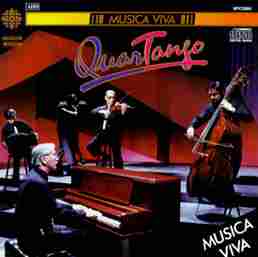 Four better tango musicians than the quartet QuarTango would be hard to find. From the opening bandoneon cadenza on "La Cumparsita" to the romantic solo piano introduction of Adios Nonino to the percussion ensemble solo (when the musicians tap their hands on their instruments) during the final track (Taquito milatar), the entire album is a joy to listen to -- and dance to. Never a dull moment.

I was impressed by the interplay between musicians; no one instrument dominates; all contribute equally to the presentation, thereby making the result a incredibly rewarding performance. There is not one extraneous note; everything has its place and every note contributes to the whole.

How can I single out special moments when I found the entire album memorable? It is difficult. I found the use of the theme played by the single-pitch percussion noteworthy in Nocturna and Bornsten's violin cadenza in Adios Nonino exciting and distinctive as well as the several double bass solos by Rene Gosselin.

The liner notes by Kim Obrist (written in French and English) are well-written and delineate a short history of the tango. I quote from them: "The tango has an alluring quality linked with hot, sinous rhythm said to echo the act of love by working up faster and faster, to suddenly die -- a veritable confession of love with the feet. . . .

"Tango was first heard in the docklands of Buenos Aires and surrounding area at the end of the 19th century, and is thought to have evolved from the faster Spanish "milonga', and the slower Cuban 'habanera'. It also has the African overtones of the 'candombe', which along with other traits, link it with jazz. Tango was first performed largely by women-less male immigrants in bar rooms and on street corners. No honourable woman was permitted to dance it. . . . The Mayor of Buenos Aires passed an edict forbidding men to dance together. . . .

"At the outset respectable Argentinian society banned it, for its supposed sensuality and lasciviousness. . . . Initially it was denounced in England as 'a dance of moral death'. In 1913, Cardinal Amette of Paris condemned it for its lascivious nature and said "Christians should not in good conscience take part in it." Pope Pius XI demanded a demonstration of the dance by the renowned exponent Kasimiro Ain, but refused to deny absolution to tango dances despite pressure from the French church."

The members of QuarTango are Canadian, but their music follows the purest Argentinian traditions. On this recording, QuarTango presents great tangos from the repertoire, including several compositions by contemporary masters such as Astor Piazzolla and Julian Plaza. Richard Hunt chose to play on a spinet piano rather than a grand piano in this recording, I presume because the powerful bass of the grand piano might have clashed with the deep tones of the double bass and contributed to a muddy texture. I recommend this album for lovers of fine tango music.