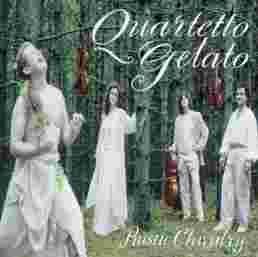 "The title of this recording, Rustic Chivalry, conjures up for us those elements of drama, passion, lyricism and earthiness -- so wonderfully present in Mascagni's opera Cavalleria Rusticana -- which inspire our selection of material. Whether in a showcase piece for the oboe (Ponchielli's Capriccio), a tender Somerset ballad (O Waly, Waly), or the headlong dash of Monti's Czardas, we hope for an immediacy of effect that speaks directly to the listener's emotions. The title also suggests the eclecticism which is an inescapable part of Quartetto Gelato's approach. In this we do not pretend something new, but rather a renewal of a European tradition of bringing together the best of many idioms in a concert experience.

"The album is full of material that is not exactly as it seems. The Hungarian Czardas was written by an Italian, the Spanish Granada was written by a Mexican and Handel's Passacaglia was mostly written by a Norwegian. Add to this Espagna Capriccioso, a piece titled in Italian referring to Spain written by a Canadian, and you have a collection of music that, while travelling to different destinations, finds itself staying overnight in the same hotel." -- George Meanwell, from the CD booklet notes

My mere words cannot justly describe Quartetto Gelato's second album; you've got to hear it yourself. From the first track to the last, this album is filled with passion, beauty and sophistication. I sincerely do not know where to begin; each track is a jewel.

The first piece, Espagna Capriccioso, is an exciting character piece (with some impressive four-part counterpoint for violin, oboe, accordion and cello) composed by the group's violist-accordionist-arranger Claudia Vena. Of special note is the accordion cadenza. Vena has obviously been practicing; his accordion technique has noticeably improved since their debut album.

One of the most attractive features of the album, besides the consummate musicianship of the performers and arranger, is the variety and contrast between selections. Pietro Mascagni's Siciliana features the expressive voice of Peter De Sotto accompanied by George Meanwell's guitar, Jacques Ibert's Entr'Acte is arranged for oboe and guitar, Handel's Passacaglia is for violin and cello, and the other pieces are scored for various combinations of tenor, violin, viola, accordion, oboe, cello, guitar and mandolin.

Handel's Passacaglia is based on the common Baroque progression: i iv V/III III VI ii0 V i, but the intricate counterpoint between violin and cello is anything but common and the harmonic variations in the slow middle section are also unusual, as are the chirping birds in the pianissimo sections (this piece was recorded at the Hubercrest United Church in Toronto which has not only attractive acoustics for musicologists and lovers of fine music but also attractive singing for ornithologists and other bird lovers). Actually the bird calls are very nice; they blend well with the instruments.

Czardas captures the drama of a Gypsy troupe: the rubato opening is scored for violin, mandolin and accordion. Later, in the fast sections, the mandolin is replaced by the cello. I thought that the various sections of the piece sometimes did not flow smoothly and organically from one part to another, but that is a minor criticism considering my overwhelming positive impression of the album.

My favorite track on the entire album is O Waly, Waly. Peter De Sotto's singing is poignant to say the least and the arrangement is amazingly simple; sometimes simple is best. The first verse is arranged for solo tenor voice accompanied by guitar. During the second verse the oboe is introduced in counterpoint with the voice. In the third verse the oboe drops out and is replaced by sustained chords of the accordion. The fourth verse increases the intensity by adding the oboe again; here we hear the full quartet for the first time in the piece.

But the most ingenious and powerful verse was the fifth and final -- for solo tenor accompanied only by far-away wind sounds produced by unvoiced sounds of the accordion's bellows. I found the effect positively earthshaking. Wow. Tango del Cuore also features the accordion's air button to invoke sounds not unlike that of a sigh.

I believe that Rustic Chivalry belongs in the collection of all lovers of fine music. Quartetto Gelato, in my opinion, is one of the finest cross-over chamber music groups I have ever heard.

P.S. The cover art is highly unusual (at least for a classical group): a shirtless and rather well-built Peter De Soto wearing solely what seems to be a the lower garment of an ancient Greek. He is photographed in a pine forest, gazing toward the heavens, face grimacing in ecstasy, as he clutches bunches of grapes, which are also entwined in his long brown hair. The rest of the quartet members (dressed more conservatively) merely look on. The inside photo shows him reclining on the forest floor, about to devour the fruit.

George Meanwell wrote in the CD booklet notes: "With regard to the cover photograph, choose one of the following: a) it is a post-modernistic take on the old Apollonian/Dionysian dialectic; b) Peter wanted to take his clothes off."