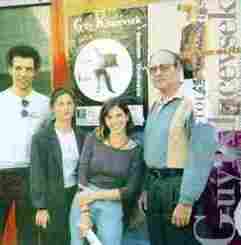 In my opinion, the accordion blends exceptionally well with strings, as can be ascertained by listening to Stolen Memories by Guy Klucevsek and the three-piece Bantam Orchestra.

The album is introspective, often meditative, and burgeoning with great poise and beauty. The fourth track -- Wave Hill -- I must have listened to it a dozen times, as I pressed the "single repeat" button on my CD player -- it was so beautiful. The piece is based on the deceptively simple "turn-around" progression: I vi IV V which repeats ad-infinitum with an Oriental-sounding melody. I felt myself transformed into a new dimension while listening to this piece. I really caught it's groove of mantra-like repetition.

Other tracks have a similar meditative quality, such as the fourteen minute-long Tesknota -- dedicated to the twentieth-century music pioneer John Cage -- which has a monophonic Oriental texture. Klucevsek wrote, "The melody [of Tesknota] consists of note heads only, divided into phrases, with no rhythmic values assigned. Performers are instructed to play their parts independently, with the provisto that they wait for one another at the end of each phrase. Thus the piece proceeds one phrase at a time, the parts intertwining like the delicately balanced units of a mobile."

Another memorable piece on this CD is the title track Stolen Memories, which is based on a traditional African melody. Klucevsek wrote, "I heard [it] on the radio years ago. I was so taken with the tune that I grabbed a sheet of music paper and jotted it down so I wouldn't forget it. For years, the sketch lay in a scrap heap of paper, carelessly unfiled and forgotten. Fortunately, I rediscovered it during one of my bi-millenial clean-ups."

One more piece worth mentioning is Donut Ask, Donut Tell, which is the only track with singing -- by cellist Margaret Parkins. (Actually, Regurgitation has some primal screams and grunts by Klucevsek, but I don't consider that singing). I don't think she is a professional singer, but her voice none-the-less has a refreshing freshness and innocence. The song is about the world's largest garbage dump landfill, located in Staten Island -- the New York City borough where Klucevsek lives.

The final track, Skating, is a duet between the accordion piccolo reeds and the violin harmonics: quite unearthly and beautiful.

This CD was dedicated to Julio Giulietti (1910-1996) -- the founder of Giulietti Accordions -- who was a visionary whose company designed, patented and built the chromatic free-bass accordion, an instrument which Klucevsek has played since 1966.