Located in the scenic Corrèze valley of Limousin, Tulle is the home of Maugein accordions. The festival this year was the 18th Nuits De Nacre literally nights of mother of pearl. Every year the festival has a different theme, and this year it was women accordionists: Quand la femme porte les bretelles (bretelles are braces and accordions are pianos with braces).

The festival was held in the centre of Tulle in two marquees, an open air stage, the municipal theatre, and nine restaurants, brasseries and bars.

I had been to Tulle before, to buy a Maugein accordion, but this was my first Tulle festival. This was quite different from any other accordion festival I had ever attended and I found it an exciting and exhilarating experience.

There were no less than 70 concerts over the four days of the festival, mostly in the evenings or nights as suggested by the festival title. At any one time, there could be seven or eight simultaneous advertised performances, with additional 'unofficial' bands and artists. 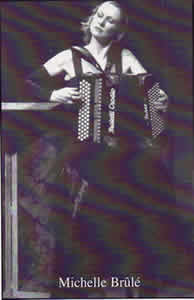 There were solo cabaret artists. The opening event, with a free buffet and drinks, featured American singer Jasmine Vegas with her piano accordion, amazing voice, wit and vitality. The programme describes her repertoire as swinging between electro-jazz and 'trash musette'. Another entertaining solo cabaret artist was Michelle Brûlé, as pictured, with her accordion, original songs, satire and comedy.

There were strong contributions of folk music, song and dance from two Limousin folk dance troupes, Les Réveillés and La Maïada. Their musicians played Maugein chromatic accordions, hurdy gurdies and pipes. They danced day and night through the streets of Tulle and always attracted a big following.

A Saturday afternoon concert in association with Friends of Jean Ségurel (legendary Corrèze singer and accordionist) brought together La Maïada folk group and a galaxy of talented accordionists and singers, including well known accordionist Christian Peschel (who also played during dinner at my hotel). This was a feast of Limousin music, folk and popular, and a rare treat that you would be hard pressed to find outside Central France. Strong musette tuning as found in the adjacent Auverne was the predominant accordion sound.

As well as an accomplished Limousin Accordion Orchestra, there was a stirring performance of Finnish and Russian music with a folk emphasis from a Finnish ensemble. They were there as part of a cultural exchange to learn about the French Accordion repertoire, particularly the role of three voice musette.

On the Saturday night there was a Bal Musette in the smaller of the two marquees with Alexandra Paris and her band. She is a fine player, but her performance was not matched by her backing group which was rather too heavy and bassy.

Most of the performances at the festival were of French music with song, from the more traditional Guinguette and Chanson Franqaise to modem popular song and French rock. The music was often the original songs and compositions of the artists. Also notable were Zazie Musette, a lively five piece Guinguette band, and Les Poulettes, an all-girl quartet who sang Chanson Franqaise in beautiful harmony. However, the bands that impressed most were two Rock bands. Terneuva, a five piece band described as 'Rock Marin' combine folk sea songs with rock arrangements and original compositions. Idaline Lopès, the sole female member of the group, plays the piano accordion and is their main composer. They produced a lively, energetic, dynamic and really 'feel good' sound and were hugely popular.

Portelli, who are described as 'Rock Méditerranéen' is the band of the talented singer and guitarist Stéphane Portelli. As with Ternueva, accordionist Marilou Emerial, playing button accordion, was the only female member. With an eclectic repertoire showing influences from folk, rock, blues and world music, their music was passionate, energetic and sensual. Their performance on the Thursday night in the smaller marquee to a packed audience of mostly under 25's was electrifying.

In both Ternueva and Portelli, the acoustic accordion was crucial to the distinctive sound and ambience of these bands. A good deal of rain on Thursday and Friday somewhat dampened the festive spirit, but Saturday was fine. On Saturday night, most of the streets in the centre were closed to traffic and heaving with people. It seemed the whole town, and people from nearby towns as well were on the streets. This really was a festival for the people, for everyone, and the atmosphere was tremendous. Live music was everywhere, always with an accordion. The restaurants and brasseries had special 'Nuit de Nacre' menus and varied food and drink was also available on the streets. This was just one huge party! On Sunday afternoon, Les Fleurs Noires, an all female 11 piece tango band of French and Argentinean musicians (four violins, three Bandoneons, cello, double bass, singer and Steinway concert grand piano) performed in the theatre. This was two hours of passion, sensuality, superb musicianship and virtuosity.

There were no trade stands, but on Friday and Saturday there were free buses to the Maugein accordion factory for a guided tour. Travelling to Tulle by train takes about five hours from Paris Gare Austerlitz. It is not TGV, but is quite scenic. The 19th Nuits de Nacre is due to be held in September 2007. Further information should be available from the festival's website www.accordeon.org.