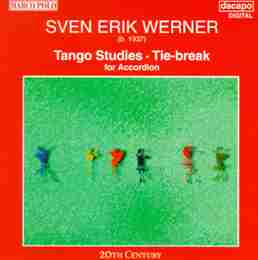 For nearly a century the tango has been one of the most popular dances all over the world, perhaps because it is a stylized mating dance, a ritualized sex game. It has retained its fascination because of its direct link with the strongest, electrified levels of human existence.

Serious composers of art music wrote stylized tangos which were meant to be listened to with the ear, not danced to with the feet. Stravinsky included a tango in History of a Soldier (1918), Kurt Weill used it in Three Penny Opera (1928), the Danish composer Per Norgard wrote Tango Chikane (1969), the American composer Robert Xavier Rodriguez wrote Tango (1985) -- a one act opera; and in 1993, Sven Erik Werner wrote Twelve Tango Studies for the students of The Danish Accordion Academy.

Werner (b. 1937) was influenced by the Polish avantgarde of the sixties; although his musical output was limited in quantity by his involvement in organizational work and politics, his compositions include orchestral and chamber works, innovative and experimental works for television, and music for pedagogical purposes.

He wrote about Twelve Tango Studies, "The tango cannot do without the accordion (or bandoneon, as it was originally supposed to be), and when the Danish Accordion Academy started, I was foolish enough to suggest that each player should have his/her own tango. As if there were not enough tangos in the world already! But the Academy liked the idea of a collection of tango-inspired pieces that would be of various levels of difficulty for teaching purposes, and could also be used as items on concert programmes."

Although Twelve Tango Studies was inspired by great Argentinean composer and bandoneonist, Astor Piazzolla, Werner's pieces seem to be -- to me -- more radical and representative of twentieth-century musical dissonant musical styles; in fact, I consider Werner's gems to be masterpieces of modern accordion writing. Some of them are subtitled, such as No. 1: Sneaking, No. 6: Flexible, and No. 7: Strolling and all of them are at times subtle, and at other times dramatic.

As might be expected in a recording made entirely by students, some of the pieces come across stronger than others (the pieces are recorded by the students they were written for); but all of the performances deserve our careful listening scrutiny. My conclusion is that the founder of the Danish Accordion Academy, Jeanette Dyremose, prepared each student with utmost care and precision: her work is reflected in the high standard of each performance.

My favorite piece on the CD is the final track: Tie-Break for accordion ensemble. The music is dramatic and powerful and the sonorities are delicious; I especially love the parallel thirty-firsts (parallel thirds separated by four octaves) between the first accordion and bass accordion which pervade the Pastorale section.

The program notes, written in English and Danish by Soren Moller Sorensen and Sven Erik Werner, are descriptive. Werner's literary contribution to the CD, titled "Tango -- A Way of Life," provides an excellent summary of the history of the tango. The music scores for both Twelve Tango Studies and Tie-Break are available from the publisher:

SAMFUNDET (Society for the Publication of Danish Music) and have been reviewed on the pages of The Free-Reed Review. I recommend this CD for all lovers of twentieth-century classical music.